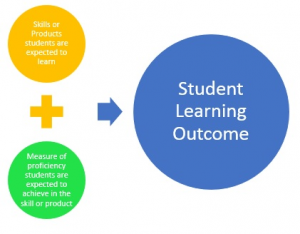 Student Learning Outcomes (SLOs) serve many functions through a typical semester. They appear on the course syllabus which serves as contract between the instructor and students, help guide choices for texts and lectures, inspire class activities and discussions, provide a basis for testing and evaluations (formative assessment), define the parameters of the course assessment at semester’s or program’s end (summative assessment), and often act as a catalyst in shaping future iterations of the course or program.

On the course level, the SLOs, sometimes referred to as Course Learning Outcomes (CLOs), not only establish the trajectory of the semester and function as guides for both instructor and students, they also serve the intellectual premise inherent in the recurring phrase What do I want my students to know and be able to do at the end of this semester or program? 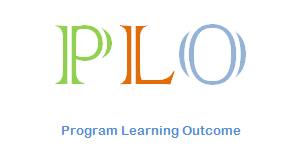 On the program level, the SLO’s, sometimes referred to as Program Learning Outcomes (PLOs), are usually assessed across the spectrum of classes that comprise the program, the student’s knowledge and skills deepening as the she advances into upper level courses.  If the program has a concluding course or project, referred to as a capstone experience, the PLOs might be embedded in different actions or demonstrations of acquired knowledge that the student must perform on the capstone project to show mastery of all of the program’s outcomes.  Capstone experiences are desirable because they will often contain all the PLOs, but more often a program’s outcomes are distributed across the content courses.  In that case, both course and program can be assessed jointly, as the CLOs are reflective of the PLOs and the outcomes will align.

Developing SLOs for a program is a collaborative effort, one that brings together the department’s professor-experts to discuss crucial aspects of their program and voice areas of concern.  Ultimately, they are the overseers, those who make sure the program  is effectively teaching what is essential for the student.  The assessment mantra for the program is the same maxim: What do I want my students to know and be able to do at the end of this semester.

Course Goals and Course Learning Outcomes are different, though they mingle and sometimes swing to the same beat.  A Department of Classics might offer a course entitled, “Rise and Fall of the Roman Empire.”  Under the section of the syllabus entitled “Course Goals,” we find information about the course itself, such as what content will be taught, what ideas and materials students will be exposed to, how the course extends skills or knowledge that were acquired in a previous course, where the course fits into an overall Ancient History program.

On the same syllabus, under “Course Learning Outcomes,” we might find the following: Notice the strong verb introducing each outcome:

Outline a composite map showing the greatest extent of the Roman empire.

Explain the political and geographical reasons for the Roman empire’s decline.

Contrast an ancient secondary source to contemporary scholarship on one of the following elements of Roman Society: Imperialism, slavery, ruling class, the role of a governing senate.

EXAMPLES OF LEARNING OUTCOMES by DISCIPLINE

Student will explain the function of DNA in human development. (Biology)

Student will demonstrate the procedure for calming an anxious patient. (Nursing)

Student will analyze and present significant data in a laboratory report. (Physics)

Student will analyze the historical development of a 20th Century dictatorship. (History)