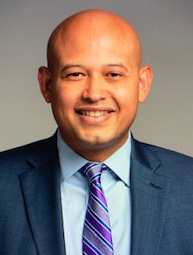 Dr. Lester Edgardo Sandres Rápalo was born in Honduras, Latin America and raised in Massachusetts. Dr. Rápalo is fluent in Spanish and English and has professional fluency in Portuguese and Italian.

Dr. Rápalo is the Provost and Vice President for Academic Affairs is the Chief Academic Officer of the College and serves as the executive officer in the President’s absence. As a member of the President’s Cabinet, the Provost participates in the development, evaluation and administration of College policy and the advancement of the College’s strategic priorities and planning. The Provost oversees the College’s fifteen academic departments and also oversees the Associate Dean for Success Programs, the Associate Dean for Curriculum Matters and Academic Programs, the Assistant Dean for First Year Program, the Scheduling Office, and the Center for Teaching, Learning and Technology.

Prior to joining Bronx Community College, Dr. Rápalo held the title of Campus Dean (equivalent to Provost) and Dean of the Institute of Intensive English at Union County College in Elizabeth, New Jersey where he supervised five deans, 12 college academic departments, 295 faculty and staff, and 133 adjunct faculty. Dr. Rápalo was responsible for the institutional management of all campus-wide programs, including the TRINITAS School of Nursing, the English as a Second Language (ESL) program and 12 academic departments. Dr. Rápalo served as the Perkins Director for the College with an operating grant of $800,000 per year allocated to 31 academic programs to support the purchase of supplies and equipment and professional development. Over the past ten years, over $10,000,000 has been allocated under this program.

Dr. Rápalo focused especially in the areas of enrollment management, personnel administration, and educational planning and evaluation. He served as the liaison between Union County College and the City of Elizabeth and worked with area organizations, both public and private, to bring the College’s services to the community. From 2015 to 2017 Dr. Rápalo was also the Dean of the Social Sciences, Business and History division for Union County College in Cranford, New Jersey. Dr. Rápalo was also the Interim Dean of American Honors from 2017 to 2018. Dr. Rápalo served on the Middle States Core Committee to work on the upcoming self-study report and its coordination/verification of the compliance’s areas.

In addition to his extensive experience in higher education administration, Dr. Rápalo has taught at various levels of education. Most recently, Dr. Rápalo has taught graduate and undergraduate business courses. Prior to that, he worked for more than five years at Orlando-based Valencia College, where his responsibilities included serving as interim dean of the Humanities and Foreign Language Department and as Chair of the Foreign Language Department while managing a full-time teaching schedule.

Dr. Rápalo earned a Doctor of Education from Nova Southeastern University in Fort Lauderdale, Florida, a Master of Business Administration from Syracuse University in Syracuse, New York, and a Master of Arts in Literature and Linguistics and a Bachelor of Arts in Literature and Linguistics from the University of Massachusetts Amherst in Amherst, Massachusetts. In addition, Dr. Rápalo has received two honorary degrees recognized by the United Nations, a Doctor in Humanities from the United Graduate College and Seminary International and a Doctors of Letters from the Academy of Universal Global Peace for his humanitarian efforts to bring educational opportunities to underprivileged communities.

Dr. Rápalo has been awarded several awards for his community outreach efforts, including The World Civility Award awarded by Ambassador Clyde Rivers and IChange Nations and the Human Excellence Gold Medal Award awarded by the United Nations University for Global Peace. During his tenure at Union County College, Dr. Rápalo was named “Ambassador of Education and Culture” by the Desfile Salvadoreño and was recognized by the United Nations for the “V Education Forum” held in Elizabeth, New Jersey in collaboration with the Desfile Salvadoreño to host a forum focused on educational opportunities for underserved communities throughout New Jersey. Dr. Rápalo was awarded a Resolution by the Union County Freeholders for promoting education, diversity, and inclusion for hosting the First International Concert for Peace in Elizabeth, New Jersey. Through Dr. Rápalo’s efforts, Union County College hosted the Vice President of Costa Rica, Mrs. Epsy Campbell Barr, the first time in the history of Union County College to receive an international executive.

Dr. Rápalo is the author of several textbooks and articles and has had several media appearances in media outlets such as Telemundo, ABC Channel 7 and Azteca TV (México).

Dr. Rápalo is a Board Member of The United Way of Greater New Jersey and is a member of the Hispanic Association of Colleges and Universities (HACU).