Every assessment handbook, booklet, or website seems to base its approach to student cognitive learning on what has become known as Bloom’s Taxonomy.  A taxonomy is simply a system that helps to classify an area of thought or knowledge, make it distinct, place it (often) in a hierarchical system , and show a progression within the hierarchy.

Dr. Benjamin Bloom, an educational psychologist, and his colleagues developed several taxonomies in the 1950’s as a way to distinguish and to order levels of thinking and feeling.  We’re concerned with Bloom’s cognitive domain, or his knowledge-based domain.  Basically, what Bloom said was that American students were being tested in ways that allowed them to “succeed” in their studies through the easier intellectual activities of memorization and recall.  Bloom and company were concerned that the developing brains of students were not being challenged enough, that schools and colleges needed to promote and to measure higher forms of thinking, such as application, analysis and synthesis.  Bloom’s hierarchy of intellectual challenge became widely known, and the cognitive taxonomy, though revised a couple of times, remains the touchstone for K-12 and higher education.  Its use is apparent in developing SLO’s. 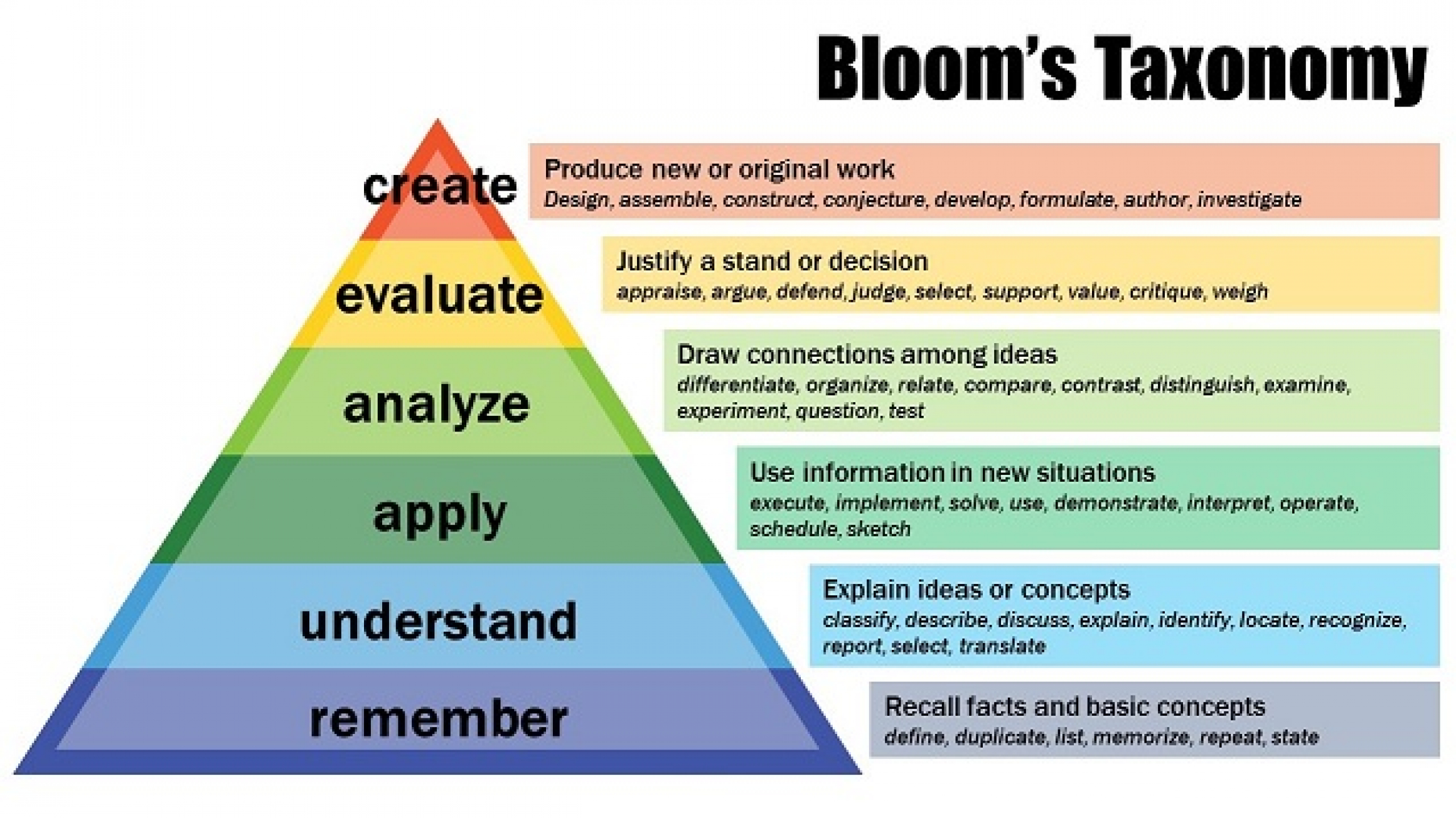 (For a thorough discussion about Bloom’s Taxonomies and contemporary revision, see  A Taxonomy for Learning, Teaching, and Assessing: A Revision of Bloom’s Taxonomy of Educational Objectives, eds. Anderson, et. al.; Pearson Education, 2001)

TIP:  Some faculty share the SLO’s of their course or program with their students early on in the semester, or in the program’s basic courses.  There are many advantages to doing so, from making students aware of the most important elements of their learning, to the levels of thinking (and work)  required for successful completion of the course or program.

If we were to search for Bloom’s Cognitive Taxonomy online we would get a million hits and a hundred graphics of different configurations prioritizing the levels of intellectual engagement, as revealed in language, and always presented in an hierarchical format.

The bottom of the pyramid represents the least intellectually challenging—simple recall; the pinnacle represents the most challenging—creation (formerly synthesis).  If we were to apply the assignment of a short story to Bloom’s, we might spread the possibilities for student engagement in the following way.  Note the increasing challenge  for the student as we scale the pyramid: