The India Initiative for Research and Education Collaboration of CUNY CREST Institute (IICCCI) was officially launched on September 9, 2022, in the North Hall Library building, the Bronx Community College through a Memorandum of Understanding (MoU) signing ceremony. The MoU was signed by the President of Bronx Community College (BCC) Thomas A. Isekenegbe and the President of The City College of New York Vincent Boudreau witnessed by CUNY CREST Institute Executive Director, Dr Reza Khanbilvardi and other guests from across CUNY, New York City and Government of India. 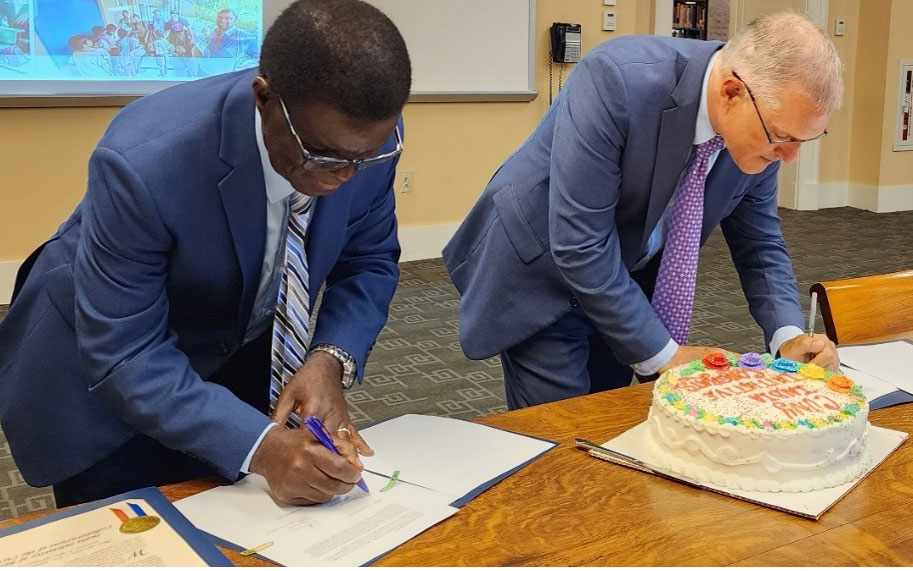 We have had active with academic partnerships in India since 2019. Under the leadership of Prof. Neal Phillip and Prof. Paramita Sen a sustainability focused study abroad program to Maharashtra was undertaken with 15 BCC and other CUNY students where they installed a solar powered weather station and participated in other science and cross-cultural diplomatic activities.

Our Prof. Phillip and Prof. Sen have received several grants for their work in India. One of the grants is a public diplomacy grant from the US State Department to install six solar powered weather stations in three states and to conduct climate change workshops for over 5,000 participants. Another is a 3yr $300,000 National Science Foundation grant with Dr Brian vant-Hull of CUNY CREST Institute to take 33 BCC/CUNY students to conduct air pollution research in Mumbai and New Delhi, beginning in January 2023.

The meeting opened with welcoming remarks and a presentation by BCC Professors Paramita Sen, Neal Phillip along with Dr. Shakila Merchant, Deputy Director of CUNY CREST Institute. They provided an overview of ongoing work and future collaborations with BCC, CUNY CREST Institute and India.

The MoU ceremony was followed by the ribbon cutting ceremony at the India Books Corner located within the Library and the signing of four CUNY approved Shared Statement of Interest (SSI) by the Indian Delegates from Maharashtra and President Isekenegbe.

The Ceremonial event began with a opening remark by the BCC President Isekenegbe, followed by CCNY President Boudreau. NYC Deputy Commissioner Chauhan, who represented NYC Mayor Eric Adams, and had the privilege to read out NYC Mayor’s Proclamation of IICCCI, which quotes –

“…When pandemic spread across out City and our nation, we were all reminded of our vast interconnectedness. That is why it is more important that ever that we build new bridges and promote the excellence and achievement of our partners abroad. The Institute will carry out its mission by securing our connections to India and illuminating those issues such as climate change, that affect us all. Today, as you gather to celebrate the opening of this powerful monument to friendship, global cooperation, and innovation, I am proud to applaud the IICCCI, and look forward to all that its scholars will discover hand-in-hand, shoulder-to-shoulder and byline-to-byline. Now I Eric Adams, Mayor of the City of New York do hereby proclaim Friday September 9, 2022 in the City of New York as India Initiative of Research and Education Collaborations of the CUNY CREST Institute DAY”

The IICCCI mission is  to foster robust and inclusive cultural-social-academic synergism between CUNY and Indian academic institutions, federal entities and private enterprise.

In his special remarks, Honorable Consul General of India in New York,  Randhir Jaiswal reminded us all of the 75 years of the Independence of India and the 75 years of diplomatic relations with the United States. Hon. Jaiswal also  expressed his strong commitment and support to IICCCI’s collaborative work with Indian counterparts.

“…. It is indeed heartening to note that CUNY is working on Climate Initiatives with Indian Cities, particularly with Mumbai. I wish and hope that the partnership will further strengthen our collaboration in the domain of Higher Education as envisaged by the National Education Policy launched by the Honorable Prime Minister of India Narendra Modi…”

In his welcoming remarks, Professor Phillip, highlighted how the “Yatra” to Maharasthra, India began in 2019, when Professor Paramita Sen proposed a CUNY India Study Abroad program. The program became a reality and was spearheaded by Professors Sen and Phillip in conjunction with the IBM Smart City of Townsville, Australia and with the 15 BCC/CUNY students.   .

In his opening remarks, Executive Director of the CUNY CREST Institute Dr. Reza Khanbilvardi proudly took  the audience down the memory lane of the history of strong partnership that continues to grow between CCNY and BCC and particularly with CUNY CREST Institute and expressed his gratitude and commitment for the CUNY India work that was started by Professors Paramita Sen and Neal Phillip in 2019, and will now be expanded  and further strengthen by including more research and educational collaborations between Indo-US academic institutions through the IICCCI. 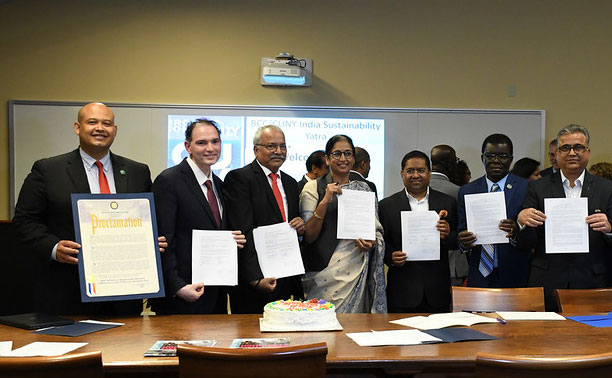 The Master of the Ceremony Professor Paramita Sen, concluded the event by thanking one and all who made this formulation of IICCCI and the MoU event possible. See more event photos at https://flic.kr/s/aHBqjA6N71​