A BCC INSTITUTION STUDIES ITSELF 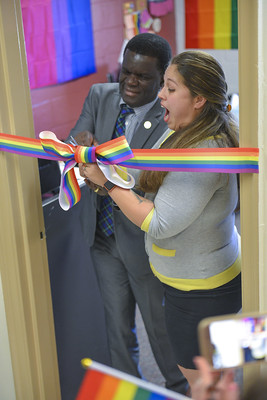 On October 30, 2018, the ribbon was cut on the LGBTQI+ Resource Room at Bronx Community College. Since then it has become a safe and welcoming environment for all sexual orientations, gender identities and gender expressions, featuring LGBTQI-focused education, programming and support services.

And now it is the focus of a scholarly analysis of the factors that led to its success.

Dr. Emalinda McSpadden, Assistant Professor of Psychology in the BCC Department of Social Sciences and a co-founder of the Resource Room, has published a new article in the Journal of Gay and Lesbian Social Services. “Creating LGBTQI+ programming in urban higher education: Considering the creation process of a campus resource room” presents the creation of the BCC LGBTQ+ Resource Room as a case study for all who seek to establish similar spaces on other 2-year college campuses.

“There aren’t a lot of situations like ours at BCC,” says Dr. McSpadden. “When we started developing the LGBTQI+ Resource Room, we searched for other examples. Based on my research. I realized that in the entire country there are only a handful of community colleges that have a space like we have now. 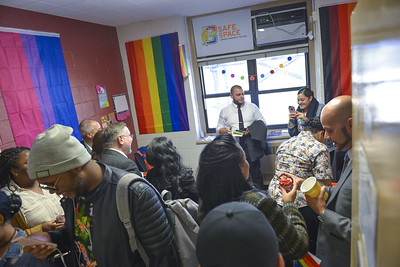 “A lot of people think that when you have a resource space like this, it’s enough to devote a room, hang up a rainbow flag and that’s it. There’s no staff, no oversight. Maybe there’s someone down the hall who sticks their head out occasionally to see if anyone’s come out of the room.”

BCC’s own iteration of an LGBTQ space could not be more different. Its combination of practical and moral support has proven so popular that is outgrowing its room on the third floor of the Roscoe Brown Student Center. That vital role continues even during this unexpected era of social isolation. “We are still open and serving students, having moved into a virtual space via Zoom,” Dr. McSpadden notes. “So we’re still having support groups, club events, educational programs, etc. during the COVID-19 epidemic.”

“Creating LGBTQI+ Programming” is both a history and a how-to guide based on the BCC experience. It even comes with a workbook.

The article could be describing itself in its closing words: “It is crucial that those attempting to create these spaces on community college campuses reach out to others who have created similar resource spaces at their own colleges. The sharing and support between such resource providers is fundamental to encouraging the continuing growth and development of more and more such spaces in places where they are so urgently needed.”