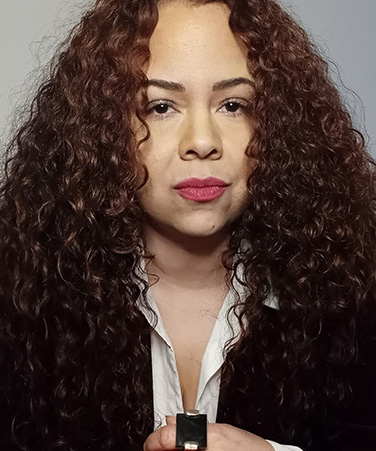 Dr. Grisel Y. Acosta is an Afro-Latinx, queer, full professor at the City University of New York-Bronx Community College. Her poetry collection, Things to Pack on the Way to Everywhere, was a 2020 finalist for the Andrés Montoya Poetry Prize, and was published by Get Fresh Books in 2021. She is the editor of Latina Outsiders Remaking Latina Identity (Routledge, 2019), an anthology featuring over 30 scholarly and creative works by Latinas from throughout the United States. Select creative work is in The Baffler; Platform Review; Gathering of the Tribes Magazine; Best American Poetry; NOMBONO: Speculative Poetry by BIPOC Poets; Speculative Fiction for Dreamers: A Latinx Anthology; Split this Rock; In Full Color: A Collection of Stories by Women of Color; Pembroke Magazine; the NAACP Image Award nominated Check the Rhyme; The Reproductive Freedom Anthology; Basta!: 100 Latinas Write on Violence Against Women; Celebrating 20 Years of Black Girlhood: The Lauryn Hill Reader; Paterson Literary Review; Acentos Review; and American Studies Journal. Her scholarly articles and essays can be found in The Routledge Companion to Latino/a Literature; African American Women’s Language; The Handbook of Latinos and Education; Western American Literature; Diálogo; Salon; Oprah! Daily; English Kills Review; The Kenyon Review; Women’s Media Center; and VIDA: Women in Literary Arts. She received her Ph.D. in English—Latinx literature, from the University of Texas at San Antonio and has presented her creative and scholarly work in London, England; Cartagena, Colombia; Catalonia, Spain; Buenos Aires, Argentina, and throughout the United States. She is a Geraldine Dodge Foundation Poet, a Macondo Fellow, and the Creative Writing Editor at Chicana/Latina Studies Journal. At CUNY, she has been a part of diversity and inclusion reform on her own campus for several years and has held several chair positions within the Mellon Foundation-funded Black, Race, and Ethnic Studies Initiative Commission. Her work is dedicated to her own Colombian and Cuban parents, who were community leaders in Chicago’s Logan Square neighborhood when it was majority Latinx. She is the first person in her family to be born in the United States.