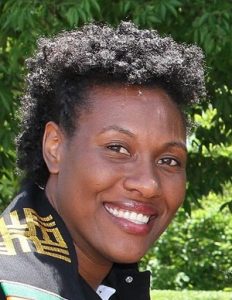 Since arriving in the Bronx from Jamaica in 1994, Athletic Coordinator Faith Thompson’s career has been rooted in Bronx Community College, where she graduated as a Liberal Arts, Education option major in 2005.

“While I was a student, Vice President Marcia Keizs offered me a college assistant position to work with her. She was such a great mentor throughout my years at Bronx. Three months into the job, she advised me to take the CUNY Office Assistant exam and I was hired full time working in student affairs. I was there quite awhile, serving four VPs.”

Thompson’s main role was assisting the judicial affairs officer. During this time, she continued her undergraduate work at Lehman College, receiving a B.A. in Sociology in 2011.

“By 2012, I was ready for another challenge. I sat down with our new vice president and expressed my interest in doing more.”

“More” turned out to be the Athletic department.

“We had just gotten a new athletic director as well and he needed an assistant. When he left in 2014, for a year and a half, I assisted the interim director, Orlando Lopez, in everything: scheduling games, ordering apparel and equipment, helping out with student eligibility, pre-game setup and post-game breakdown. I was also involved with academic support, making sure our students were staying on task with their academics.

“That’s where I found my love of athletics. I tell people I didn’t chose Athletics, Athletics chose me.

“I think of myself as the glue between the director and the coaching staff and the students. I am very relatable to BCC students since I was one myself, so they come to me for a lot of things. Sometimes they have a hard time juggling the athletics piece and the academic piece. I help them to navigate day-to-day situations if they can’t find a job, if they’re having issues commuting, if they’re having trouble with homelessness or food insecurity. I’m very familiar with the resources around campus so I’m able to direct them.”

And what makes for a successful BCC student-athlete? “A good balance. If they’re great on the court or the field, you need to have that same energy in the classroom.”

The pandemic was particularly hard on her students. “What motivates a lot of them, the driving force for attending school, is their sport. Not being able to participate in their sport is discouraging. We’re getting creative in trying to stay connected. We’ve hosted a few student athlete town halls and the coaches still meet with their teams, but on Zoom. Our soccer students record their workouts and post them online.”

In her non-BCC life, Faith Thompson practices her faith. “I am very involved in my church. I have a passion for children, so I teach Sunday school. During the summer months, I like to play Netball on a club team. We compete around the tri-state area in a CANA league. I also have two teenagers of my own, so my hobby is making sure they are fulfilling their hobbies.”

Otherwise, you can usually find Faith on the campus of Bronx Community College.