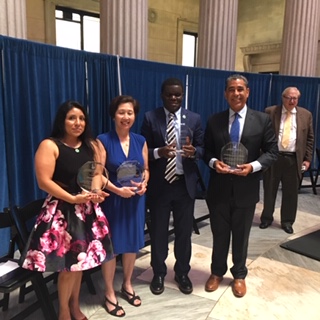 On June 29, Bronx Community College President Thomas A. Isekenegbe was one of four recipients of the 2019 Alexander Hamilton Immigrant Achievement Awards. The distinction is awarded by the Lower Manhattan Historical Association to American citizens who were born outside the United States and have made outstanding contributions to Lower Manhattan and New York as residents of the state.

Dr. Isekenegbe was appointed the sixth president of Bronx Community College in August 2015. Born in Nigeria, he is the first City University of New York president of African origin. His career as an educator and administrator spans nearly 30 years at both two-year and four-year institutions of higher education.

“I am honored to have received the Alexander Hamilton Immigrant Achievement Award in memory of a historic American contributor,” says President Isekenegbe. “Like me, he immigrated to the United States with a heart full of wonder and possibilities. I dreamed of becoming an educator. So to be recognized for serving a community of students, faculty, staff and alumni — many with stories similar to my own — is incredibly humbling. And to be alongside selfless New York greats like U.S. Representative Adriano Espaillat, Disabled Veterans outreach Program Specialist Mery Lezama and family of the late World War II veteran Peter Woo, made this milestone all the more special.

“We exist in a time when not all people value the contributions of those born outside of the States. I look forward to continuing to serve all who seek to learn and grow.”