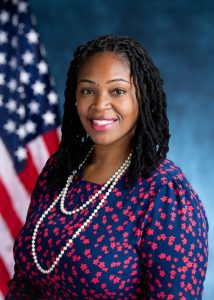 “I grew up in Harlem, one of six kids,” says Chantel Jackson, now at the beginning of her first term as the New York State Assemblymember from the 79th district in the Bronx. “We grew up on public assistance – food stamps, Medicaid, public housing. I had my daughter when I was 18. That too helped me realize how much of a role government played in my life. I think there aren’t enough people in government with my story and my voice.

“Also, I am a social worker and we don’t have enough social workers at this level of government. I know when you reduce funding to a program how it affects people in the community. Those were the reasons I decided to run for the Assembly — so I can make policy with all those things in mind.”

She counts her mother as her greatest influence. “My Mom came from nothing. She immigrated from Belize. I watched her raise her children on her own while graduating from Lehman College and working for the Metropolitan Transit Authority, I watched how she persevered through everything. Now she is vice president of her local (Local 1655 of the DC 37 public employment union) and very active in her community.” Her father attended college and completed his studies at City College. Now he serves as the CEO of W.I.B.O (Workshop In Business Opportunities).

Assemblymember Jackson has much she aims to accomplish in Albany. “One of the things I am extremely vocal about is our mental and physical health. People in the Bronx are dying from COVID-19 in record numbers because of our pre-existing conditions, like heart disease, obesity, diabetes, asthma. We must start adjusting the environmental factors that cause these things.”

The Assemblymember’s work on the Education Committee also draws on her experiences. “I’m a City College grad, my mom went to Hostos. We’re CUNY people. I was a college adviser for nine years and sent high school students off to college.” In that capacity, she became a promoter of Bronx Community College. “BCC gives us a great education in our local community. Two programs I love are Automotive and Nursing. People come out with actual careers that put them in a comfortable space to live in the Bronx.”

The issue of education also has a personal side. “My daughter is now 19, and she just completed her first semester at the Fashion Institute of Technology. I raised her while I was at City College. I cried a lot of days but I made it through.” Now freshman Assemblymember Chantel Jackson is making it through her biggest professional challenge yet.