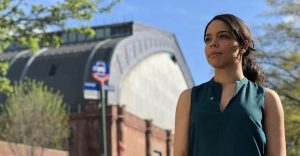 Bronx Community College and New York City Council Member-elect Pierina Sanchez have much in common: they both serve the people of District #14, where Sanchez was born and raised.

“We were a very humble family from the Dominican Republic, doing whatever it took to make ends meet,” Sanchez recalls. “One of my aunts was a custodial worker at BCC. One day she was cleaning around Gould Hall and she noticed a bunch of high school students. She asked the dean why there were young people on the campus. The dean told her, ‘Yes, we have this college prep program called Upward Bound.’” That was 25 years ago. Since then so many of my family members have gone through the Upward Bound Program at BCC.”

BCC’s Upward Bound is such a tradition that the Sanchez family calls Director Michelle Danvers “Auntie Michelle.” Pierina was one of the most dramatic beneficiaries of the program – Upward Bound was part of what prepared her for a full ride at Harvard.

While earning her degree in social and cognitive neuroscience, Sanchez began her first forays into public service, working for an immigrant services non-profit. “I also worked at the local jail in Boston tutoring young men to attain their GED.”

Upon graduation, Sanchez returned to District #14 and worked in the office of City Council Member Fernando Cabrera. “I directed constituency services, working with thousands of people on the issues that were facing them.”

The experience inspired her to get her master’s in public affairs at Princeton, which she applied for concurrently with an internship in the Obama White House in the summer of 2012. “The Obama administration was pursuing immigration reform. Part of my job was identifying the stories that illustrated the need and elevated the Latino voice in the White House.”

Her post-Princeton career included four years at the Regional Plan Association, a nonprofit think tank that works on long-term planning for the tri-state area, and a position with the Mayor’s Office as Senior Advisor for Housing, Economic Development and Labor.

For the Council Member-elect, representing the neighborhood she grew up in is “like coming full circle. I want to put every single ounce of my being into fighting the deep inequalities that we face in this city: income levels, housing insecurities, educational attainment, health outcomes — the categories go on and on.

“We are the home to an incredibly resilient people, like my family and the students at BCC who have gone through so much. I want the opportunities I had growing up in District #14 to be more the norm than the exception.”

CM-elect Sanchez will make education a major priority. “I sat down with BCC President Isekenegbe. I’ll be working with my City Council colleagues to secure funding that addresses BCC’s capital needs. I will see that BCC has ample resources to provide workforce training and development.” She also wants to ensure continued funding for ASAP to address “the unique challenges facing lower income students.”

She hopes to further Bronx Community College’s role as “an anchor institution in the borough, fully integrated with and accessible to the people of the community.” And Council Member-elect Pierina Sanchez is herself an example of how BCC can transform lives.