BRONX BEAT: “My pandemic role has been a real eye-opening experience” 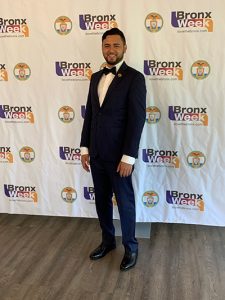 Just two months ago, Justin Sanchez became the Director of External Affairs for the Office of the Bronx Borough President.

“Yes, it was a mid-pandemic promotion. The person I replaced went on to another role.”

It was the latest step in Sanchez’s rapid rise through the ranks of the Borough President’s office, following 13 months as the Deputy Director of External Affairs and nine months as a Community Board Liaison. Before that, he both worked for a City Council Member and ran for the City Council himself.

Justin recalls fondly the roots of his career when he went door-to-door as an organizer for the Working Families Party. “That’s how I got my start in this whole hubbub we call politics. I was a canvasser and worked my way up to recruitment director.

Now a whole borough is his bailiwick. “Given the pandemic, my role has taken on that of jack-of-all-trades. You need to fit in wherever some other part of the organization needs you. That’s in addition to my role of being that liaison between the Borough President and the people of the Bronx.

“I run an LGBT task force meeting which puts forth the agenda for the Borough President’s office on these issues. Right now, verily heavily on our radar is the number of black and brown transwomen who are being killed across the borough.” Sanchez also runs an HIV round table every month, whose aim is to lower the infection rate across the borough.

Other responsibilities of his office: park cleanups, food distribution boxes, job fairs, college fairs, visiting seniors to make sure their needs are being addresses — “We have a dedicated senior services team,” he notes.

“Any borough-wide issue that is happening, there is someone from the office on it or myself.”

One big change brought on by the pandemic is the cancellation of some major borough annual traditions usually handled by External Affairs. “We weren’t able to have a Bronx Week this year.” And at least postponed is the “Tour de Bronx,” the largest free bicycling event in New York State, which usually attracts thousands.

“All these big events are no longer in existence. So we’re finding ways to transition them from in person to online, but also keeping that engagement up given that at least 25% of folks in our borough, especially in the South Bronx, don’t have access to the internet. So my pandemic role has been a real eye-opening experience in how well-equipped city government is to handle crises in the 21st century.”

“We’ve had health forums that we’ve done online, LGBT policy meetings. We’ve done a ton of census outreach, working with our community affairs team. Right now, the borough has a 59% response rate, which puts us second in the City. But we at external Affairs and across the office are trying to get that number as close to 100% as possible.

“One of the big things I have been doing with our education team is making sure that we are on frontline of the fight to save CUNY. We’re making our voices heard to make sure as much funding as can stay in CUNY stays in CUNY. Institutions like BCC are the way that black and brown students are being educated.” It ls a passion that comes naturally to Sanchez. In addition to working full time, he is a student at the CUNY School of Labor and Urban Studies and a student body president.

While his public career has been flourishing, Sanchez has been undergoing a personal journey as well. “I only came out as a gay man six years ago. To be embraced and to have worked my way up from a City Councilman’s office to a borough-wide position says a lot about where the borough is headed and the social progress we have made in a very short amount of time.”