BRONX BEAT: “The Entire Epidemic Has Been A Test Of Perseverance.” 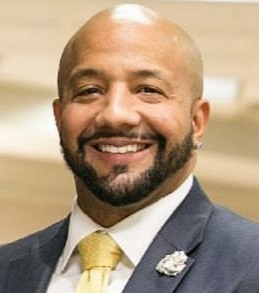 “I grew up in the Bronx,” observes Alfredo M. Anguiera, lawyer, businessman and Board member of the Bronx Community College Foundation. “My mom was heavily involved in the community and public service. She was the district manager for Community Board 12. There’s a street in the Bronx named after her: “Carmen Rosa Way.”

His ties to the College began with the Upward Bound program on the BCC campus. “I attended classes every Saturday in Meister Hall from seventh grade till I graduated high school.”

From CUNY he went to SUNY, first Oswego, then Albany, graduating with a B.A. in Public Affairs. This launched him into a career in government and activism, first in the State Assembly and then New York City Council. “I was a crime victim advocate for two years before I decided I want to go to law school.”

Anguiera then worked with inmates at Riker’s Island and for the New York Council on Adoptable Children. Eventually he landed at the Bronx Overall Economic Development Corporation. “I was the general counsel, as well as the executive director for the Empowerment Zone, which provided low-to-zero interest loans to businesses to help job creation.” That position put him in charge of a fund of $55 million.

Then, in 2016, came an opportunity that changed everything. “I became the co-owner of the Bronx Draft House. I was working at the courthouse up the block and I know the area. Everything revolves around the Yankees. We thought, let’s focus on the people who live or work in the community.”

The revived restaurant was a huge success and soon Angueira and his partner opened other venues, including Beatstro “the first hip hop themed restaurant in the world. There’s nothing more Bronx than hip hop.”

His ties to both the public and private sectors in the Bronx made Angueira a perfect fit for the BCC Foundation. “Board Chair Olga Luz Tirado reached out to me to gauge my interest in joining. I said of course. It felt like a homecoming.”

COVID-19 has had an impact on Board meetings, which are now virtual. “We can’t have a gala, but we still need to raise funds.”

The pandemic also forced a radical change in his business, “We turned our restaurants into distribution sites to feed hungry people. At our peak we were providing over 10,000 free meals a day.

“This has taught all of us a lesson in being able to change as quickly as possible and to problem solve. The entire epidemic has been a test of perseverance and adaption.”