CARING FOR THE CAMPUS: MINDING THE GROUNDS 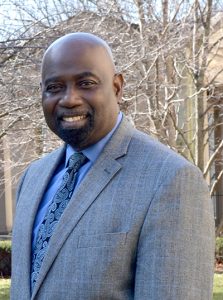 The physical Bronx Community College is closed, but the people who look after its grounds and buildings are as busy as ever. Chief among them is Assistant Vice President of Campus Operations David Taylor, who still reports to work at his office in South Hall.

“Campus Operations is preparing for eventual reoccupancy, whenever that is. We are doing constant deep cleaning of all campus spaces, offices, auditoriums, classes, all public spaces. So when we do open, we’ll be in a safe and healthy environment.”

Some spaces are cleaned more than once. “When no one is visiting, a room is shut off and it is marked as being sanitized and nobody touches it,” notes AVP Taylor. “But we do have faculty and staff who come and go for various reasons. Once a space has been entered, we go in and reclean again.”

“The big thing is maintaining our social distancing. We make sure there is adequate signage and markings on campus so people know where to keep their six-foot distance. One-way travel is encouraged where it’s practical. We make sure that everyone who enters the campus wears a mask.”

“The essential staff never left campus,” AVP Taylor says with pride. “We went from heating to cooling season. We had to go in and examine all the spaces where we are now running air to make sure it was circulating properly.” The campus is employing a layered approach to reduce the COVID-19 risk.”

“We’ve installed splash guards wherever you can expect face to face contact. You’ll see those in the Registrar’s office, the financial aid office, in student service areas. Those are already designed, built and implemented.

“Between 25 to 50 people are on campus at any one time on staggered shifts. They report to their respective areas so we limit the groups of people at any one time.”

“Capital projects put on pause by Governor Cuomo have been resumed to a certain degree. For example, the 2020 capital project is underway. That includes a new STEM center in Meister. While contractors are on campus, they are responsible for implementing a health and safety plan to maintain the safety of their workers as well as the rest of the campus.”

When some students return for labs and other classes in the fall that can’t be adapted to distance learning, there will be changes. “That will mean maintaining that six-foot radius between lab seats, classrooms and in any offices that are occupied, in addition to requiring the use of necessary PPE — face coverings, gloves, etc.”

Taylor has been at BCC for well over 20 years and CUNY for some 35. He’s also been an administrator at LaGuardia and Hostos Community Colleges, as well as York and Medgar Evers College, the latter in his native Brooklyn. He is the son of immigrants from Barbados and makes a point of mentioning that he went to New York City public schools and CUNY, receiving his MBA from Baruch. “Today I’m back in Brooklyn in the house where I grew up.”

AVP Taylor points out challenges facing him and his staff that might not occur to others. “We’ve had to keep the water running to make sure we don’t have Legionnaires disease pop up. With all the rain we’ve been having, we’ve had to cut the grass continually. We are responsible for the perimeter of this campus as well, to the middle of the street all around the campus, which takes a beating every weekend because folks come and have their neighborhood parties. Our men and women are out both on the campus and off the campus, trying to maintain things.