To the College Community: 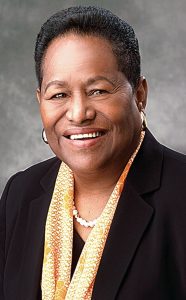 It is with profound sadness that I announce the passing of President Emeritus and University Professor, Dr. Carolyn G. Williams. Former BCC President Williams passed away last night in her home city, Detroit, Michigan at the age of 81.

In 1996, Dr. Williams was named BCC’s fourth president, the first woman to hold the office. Her legacy of student success has been woven into the very fabric of our institution. She was the guiding force behind $150 million in capital construction, including the building of North Hall and Library and the Children’s Center, as well as the renovation of the Roscoe Brown Student Center. These projects were mere dreams for many years before President Williams turned them into reality.

Her steadfast leadership led to BCC’s student body growing to over 10,000 during her tenure and our diverse faculty increasing by more than 90 full-time educators. She was responsible for the College’s first general education program and first Strategic Plan. Campus centers devoted to student success like the Writing Center, the Math Lab and the Center for Teaching, Learning and Technology were also established during her tenure.

Her 15-year tenure was marked by the rapid expansion of BCC’s international presence, including partnerships with schools in Africa. In her own words, that initiative was “not just study abroad and the influx of international students, but the curriculum and the whole climate of the college. We were able to bring global issues into our community.”

At the national level, Dr. Williams was actively involved with the American Association of Community Colleges (AACC) and served as the Chairperson in 2000. She also was actively involved in the National Council on Black American Affairs (NCBAA), a council of the AACC. Her work with NCBAA involved the development and mentoring of African American future leaders. To accomplish this goal, the Carolyn Grubbs Williams Leadership Development Institute was established in her honor. The Institute prepares African Americans in community colleges for leadership roles to insure that the pipeline to executive-level positions is fluid.

President Williams will always be remembered for her passionate commitment to the students of Bronx Community College. “The students’ success is our success,” she was fond of saying. It is a guiding philosophy of BCC to this day.

I have reached out to President Williams’ family and was informed that funeral arrangements are ongoing. At the appropriate time, we as a community will plan a virtual memorial in her honor. Please join me in mourning the death and celebrating the extraordinary life and work of our fourth President, Carolyn G. Williams.

A Special Tribute in Honor of Dr. Carolyn G. Williams