Dr. Jordi Getman-Eraso: “I knew BCC was the place for me.” 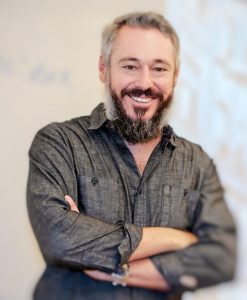 “The moment I got to the campus and saw the neighborhood, I just knew BCC was the place for me.”

He had taught history at community colleges in southern California. But once here, Professor Getman-Eraso refined his teaching style.

“I had a storytelling approach to my teaching that my students found interesting. But the big revelation for me at BCC was that they were just memorizing what I was saying. We weren’t engaging in deeper conversations. I changed my style of teaching so that the students were front and center, not me. I tried to get to know them — what their aspirations are and where they see themselves in the world.”

He knew from his own experiences the transformative power of education. Dr. Getman-Eraso grew up in Spain with a grandmother who barely knew how to read and write but made sure her children received an education. One generation later, his mother earned a master’s degree in finance.

“I see working at BCC as my way of continuing that trend,” says Dr. Getman-Eraso. That commitment has extended well beyond the classroom.

“I developed a revamped and hugely expanded honors program with a colleague starting in 2005, We felt that our students deserved an honors version of whatever course they wanted to take with a professor who takes them to a deeper knowledge of the topic.

“I also created with another colleague BCC’s eportfolio program in 2009. It allows students to bring together the personal and the academic as they create eportfolios that are websites that allow them to develop an academic identity online that can showcase their work for transfer to a four-year college or to potential future employers.”

The impact has been profound. The passing rate and retention rate throughout the last decade for students in eportfolio classes have been on average ten percent higher than that of their peers.

Dr. Getman-Eraso distilled what he has learned after 18 years at BCC in the keynote address of this past January’s virtual Conference on Community College Excellence. Entitled “Empathy, Equity, Empowerment: Toward a Bronx Model of Learning,” the speech can be seen in its entirety here: https://www.dropbox.com/s/e7lj5810ybc1san/Welcom%20and%20Keynote%20zoom_1.mp4?dl=0

“We just had the state of New York approve the first ever online degree at BCC in Liberal Arts and Studies.”

The idea has been brewing for ten years, but flourished during the pandemic when teaching and learning online was suddenly a necessity. Eventually the goal is to have online degrees available from every department.

“We need to offer the best online program at any CUNY community college so we can attract students not just from the Bronx, but from the rest of the city or even other parts of the country and the world.”