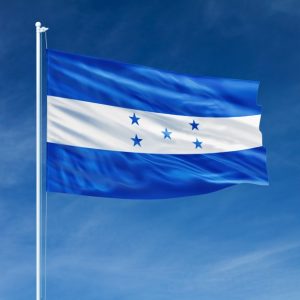 In the first days of November, Hurricane Eta roared through the Central American nation of Honduras, washing away whole communities already devastated by earthquakes. In response to this tragedy, New York City Council Member Fernando Cabrera and Bronx Community College launched a joint effort to provide relief to the Central American country. It kicked off on a windy Monday, November 16, at BCC’s Hall of Fame Gate, which will serve as a drop off point for desperately needed donations of food and clothing. (That Friday, the drive received national attention on Telemundo’s morning news program, which featured an interview with BCC Provost Lester Sandres Rápalo.)

“For the Honduran government and those who are trying to do good works down there, it’s simply overwhelming,” noted Council Member Cabrera. “They need outside support. That’s why we’re saying in the Bronx we’re here to help and bring supplies. We’re asking for food, we’re asking for clothes, any kind of supplies you can imagine you’d need to make it through a hurricane. Box them up, bag them up, bring them right here.”

Added BCC President Thomas A. Isekenegbe, “When other nations experience natural disasters, we feel it here at BCC — and we respond. We contributed to earthquake relief in Puerto Rico earlier this year, and now we are doing the same for the victims of Hurricane Eta in Honduras. We call on all New Yorkers to join us.”

Tuesday, November 24th, is the last day of the drive, which runs from 10:00 a.m. to 4:00 p.m. Greatest needs include bottled water, non-perishable food, including canned goods, rice and pasta, clothing, diapers, feminine products, disinfectants and such pain relievers as Advil and Tylenol.

Council Member Cabrera credits Crescencio Bulnes, President of Sociedad Hondurena Activa De New York, for starting this life-saving appeal, as well as the Sergeants Benevolent Association for its generosity. “Now is the time for us to stand together as a community and join forces to help our friends, neighbors and families.”