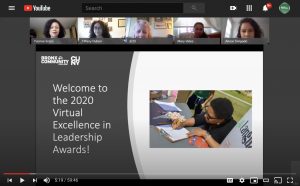 Our student leaders weren’t going to let a global pandemic stop them from celebrating their achievements. And so the 2020 Virtual Excellence in Leadership awards were presented on Thursday, May 14, in the space where BCC currently conducts its activities: cyberspace.

“It is so nice to see so many of our student leaders here,” said Student Life Specialist Dr. Yvonne Erazo. “These are annual awards that are offered to students who have been nominated and selected by students.” The attendees assembled in front of laptops across New York gave a loud cross-city shout out.

The festivities began with a new honor: The BCC Broncos Best Student Leader of the Year Award, which went to Quiana Berry, current president of the Student Government Association and former Chair of the Inter-Organizational Council. “Thank you all for allowing me the opportunity to learn through leadership,” Ms. Berry said enthusiastically.

Club Member of the Year: Sierra Robinson, ASEZ – Save The Earth from A to Z Club

Club Officer(s) of The Year:

Most Significant Campus Impact: CUNY Coalition for Students with Disabilities

Outstanding New Club: ASEZ BCC – Save The Earth from A to Z

Most Outstanding Club of The Year: CUNY Coalition for Students with Disabilities

A memorable moment of the afternoon came with the presentation of a special Staff Award, given to those who went on leave and were so missed during their absence that their return was deemed award worthy. And so, this year’s “BCC Return of the Mack” Award went to Mr. Clifford L. Marshall II, Program Manager of BCC’s Male Empowerment Network. In that capacity, he named the newest inductees into the M.E.N. Student Leadership Academy: Tiffany Medina, Christian Davila, Christopher Devone, Estevan Rivera, Hayale Smith, Lennin Charalla-Quintanilla, Richard Rodriguez, and Vishwanauth Persuad.

“You guys are in a long line of students since 2008,” noted Mr. Marshall. “We have close to 100 students who have been inducted into the Leadership Academy.”

One group of awards was very much in keeping with the times: the BCC First Responders Awards, created by Quiana Berry to give special recognition to heroic service during the pandemic to BCC’s Nursing, Medical Laboratory Technician and Radiological Technician students. Said Ms. Berry, “I want to thank you for being the definition of a true leaders.”