The Mystery of the Dead Rats 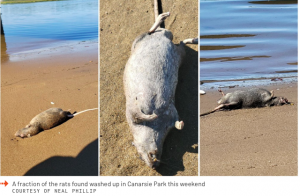 The day after Hurricane Ida swept through New York City, Dr. Neal Phillip, Chairperson of BCC’s Department of Chemistry, Earth Sciences and Environmental Sciences, was taking his usual spin through Canarsie Park on a bicycle fitted with sensors for monitoring the environment. That’s when he saw something not at all usual on the beach nearby.

Rats. Many, many dead rats. They had been drowned en masse when their home in the city sewers was inundated with torrents of rain the day before. Similar scenes were witnessed across the city. To Dr. Phillip’s trained eye, it was more evidence of a major focus of his work at BCC: climate change.

“We had flash floods in New York City. That’s unheard of,” noted Dr. Phillip. “Rats are very resilient. They have been around for millions of years and even they could not survive climate change. They live in the sewers and sewers don’t normally get that flooded. The fact that you had a full sewer and rats were drowned in such numbers, that in itself is an indication that climate change is impacting all populations.”

Dr. Phillip took photographs of the trail of rodent corpses and posted them on Twitter. The local news website the Gothamist picked up the story, interviewing Dr. Phillip and running his photos. From there the tale of the rats raced around the world, appearing in the New York Times, Newsweek, CNN, the online edition of Smithsonian Magazine and even London’s Daily Mail, where it was spotted by Dr. Phillip‘s relatives.

The ratpocalypse is a vivid illustration of what is taught in Dr. Phillip’s department. “We have a class on meteorology where they teach about hurricanes and severe weather events. Climate change is a big subject there. We get over 450 students every semester in our environmental science class, and one of the major themes is climate change.”